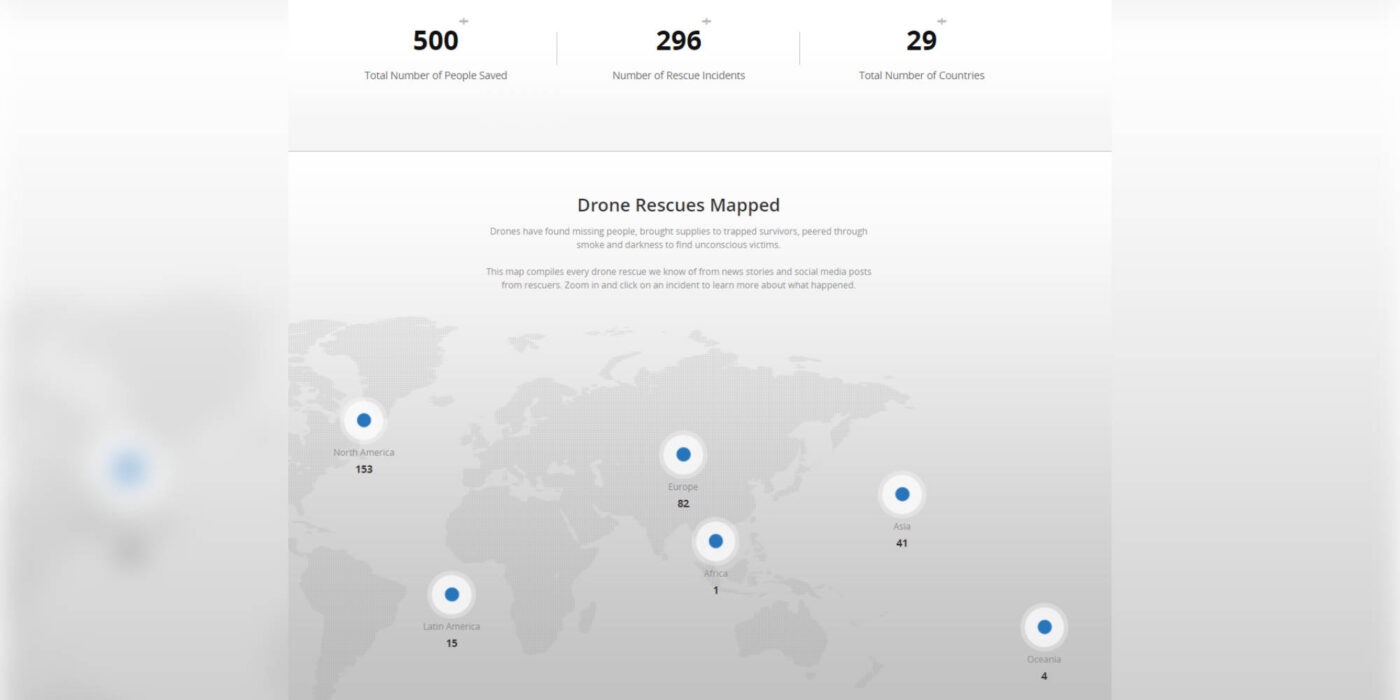 December 1, 2020 – More than 500 people around the world have been rescued from danger by drones, according to new statistics collected by DJI, the world’s leader in civilian drones and aerial imaging technology. This milestone came in mid-October, when sheriff’s deputies used a DJI drone with a thermal imaging camera to find a missing 93-year-old woman in a dark field in Missouri.

Thermal video from the rescue released by the Cass County Sheriff’s Office shows how the drone spotted Chris Fairchild as a bright yellow dot in the darkness and guided deputies on the ground to her. “To see that little yellow dot, knowing that that’s the person you’re looking for, it feels great,” drone pilot Major Kevin Tieman told a local TV station. Fairchild was exhausted and had lost a shoe but was unharmed when she saw the drone overhead: “I kept saying, Come on, I’m here! Come on, I’m here!”

Fairchild’s rescue was one of several recent drone rescues around the world that were recorded on video and helped propel the global count above 500. In Split, Croatia, on Sept. 30, the Croatian Mountain Rescue Service completed rescue #494 when it learned of a man who had threatened to kill himself and left home, and used their DJI Mavic 2 Enterprise Dual to find him sitting at the edge of a breakwater. On Sept. 10 in the city of Boao on Hainan Island, China, rescuers used a DJI drone to find and rescue three surfers who had fallen into the ocean and could not swim to shore, making them the 488th, 489th and 490th people to be rescued by a drone.

DJI lists rescues from around the world on the DJI Drone Rescue Map, which tracks more than 300 incidents when police, firefighters, rescue squads and bystanders have used drones to save people from danger since the first known rescue in 2013. Drones have found missing people in darkness, helped rescuers plot paths out of hazardous terrain, brought life preservers to people struggling in water, and delivered supplies to stranded people.

“Just a few years ago, drones were an experimental technology for innovators in public safety, and civilians with drones often volunteered to help the professionals in emergencies,” said Romeo Durscher, DJI Senior Director of Public Safety Integration. “Today, public safety agencies across the world have adopted drones as a standard piece of equipment, and drones save people from peril every few days. It’s an astonishing success story for public safety, and for the people who are alive today because of drones.”

The 500th rescue occurred in the evening of Oct. 11, 2020 in Cass County, Missouri, when the sheriff’s office learned a 93-year-old woman had gone for a walk and had not returned after 3-1/2 hours. After unsuccessfully searching for her on the ground, sheriff’s deputies launched their DJI Matrice 210 drone with an XT2 thermal imaging camera, which located her in four minutes in complete darkness.

“A DJI drone is an amazing product and has allowed us to save lives. It is our responsibility to use all available technology and training to keep the citizens safe. The DJI Matrice 210 and thermal technology has done that,” Tieman said. The Sheriff’s Office acquired two DJI Mavic 2 Enterprise Dual drones this year, and four deputies are scheduled to start flight training this month.

“With more than 500 people now rescued by drones operated under basic rules, we can see how reasonable regulations with low barriers to entry literally save lives, and how useful expanded drone operations at night and over people will be when they are permitted at scale,” said Brendan Schulman, DJI Vice President of Policy & Legal Affairs. “The successful use of drones in emergencies also starkly illustrates the crucial benefits to society that are placed in jeopardy when policy proposals seek to restrict or limit access to drone technology, or raise the costs of such equipment to public safety officials.”

DJI compiles drone rescues from news stories and social media posts from authoritative sources such as police departments, fire departments and volunteer rescue squads. Each one is entered on the Drone Rescue Map with the location and date of the incident, a brief description, a link to the original story or post, and an easy way to share those incidents online. The map and DJI’s tally do not include incidents when a drone is simply used as part of a larger search process; instead, a drone must have directly located, assisted and/or rescued a person in peril.

DJI encourages public safety agencies to add their stories of drone rescues by submitting them using the form at the bottom of the map page. DJI asks anyone submitting information about a rescue to respect the privacy rights and expectations of the persons involved, and to not share any confidential or sensitive information about agency operations.