If your questions are not answered here, please contact us at LE Drones. We’re happy to help and assist you with all of your UAS needs.

What is LE Drones.org?

LE Drones (Law Enforcement Drones) provides commercial, high-tech, superior quality drones and accessories for public safety organizations. We also serve qualified employees of those organizations who intend to become FAA certified pilots for drone units within their departments. Public Service organizations along with individual professionals that work within the public safety industry are encouraged to complete our registration process.

We are dedicated to helping public service entities create, launch and scale their drone programs. Our services encompass everything an organization needs to manage hardware and logistics and to guide field personnel toward successful operations. LE Drones is a UAS and FLIR authorized dealer. Our strong manufacturer relationships, top-quality sensors, and software serve one purpose: to help our customers succeed.

Yes. We are a registered federal vendor (DUNS: 081128421 – GAGE: 8D5P4) conducting business with federal, state, county and local government entities. You can find us on Sam.gov web portal. We process purchase orders, request for quotes (RFQs), engage in competitive bidding and offer convenient payment terms to qualified agencies. LE Drones offers the latest generation drones and can help you obtain the correct equipment for your organization’s missions. Submit your questions here.

What is Blue sUAS?

The original Blue sUAS program was created in August 2020 as a way to provide secure, trusted, drone capability to the U.S. government. In short, the DoD has developed criteria that drones must meet for U.S. government procurement, and the broader Department of Defense (DoD) and Federal Government partners are only supposed to use those approved drones.

Now referred to as “Blue sUAS 1.0,” that projected selected five drone systems for approval. Those are:

These primarily American drone companies were hand-selected to build “trusted” drone systems for the DoD and other U.S. government partners. Most of the drones they make are ultra-secure, durable or have useful features.

For example, the Skydio X2 is also National Defense Authorization Act (NDAA) compliant, thanks to features including signed and encrypted vehicle firmware, an encrypted hard drive, password protection for the controller, and data link encryption.  More military-focused is the Teal Golden Eagle, which is a US-made commercial drone system designed to provide aerial surveillance and awareness. Often, one of the DIU’s Blue sUAS solicitation requirements is use of open-source technologies.

The program required the companies who built them to make some minor modifications to their drones, and also required they integrate with commercially-based ground control stations to create a standalone commercial/enterprise configuration available to all DoD and other U.S. government entities.  All five systems were listed on GSA as the only federally vetted and approved systems available for procurement.

How can an agency or department submit a price inquiry?

On the LE Drones website, go to the product you are interested in, then click on “Add to Quote” button, complete the required contact information and submit. You can also complete our Request Quote Form, print/sign it and then email/fax.

Why should I complete the registration process?

If you are law enforcement, a fire department, a rescue organization or a professional that performs duties and works within the public safety industry, you are encouraged to complete our registration process in order to qualify for our public safety discount program.

Please complete the Request Quote Form and fax it to LE Drones at (844) 773-5385. (Registration must be complete prior to form submission)

LE Drones is proud to offer our discount program to all active or honorably retired law enforcement, fire service and rescue service personnel. Individual professionals that work within the public safety industry are encouraged to complete our registration process in order to qualify for our public safety discount program. For any questions concerning the required qualifications, please email LE@LEDrones.org.

What is DJI CARE Enterprise?

With the purchase of a DJI Enterprise UAS, you will have the peace of mind knowing your drone can be replaced for a small fixed fee. If the drone is damaged by a collision, signal interference, user error, water, or drop damage, DJI has you covered. Enterprise Shield is included with your purchase and is good for 12 months, you can take advantage of this service 2 times. Below we will show you the cost for the replacement and the procedure for registering for enterprise shield.

Follow the below procedure to get your Enterprise Shield Activated. 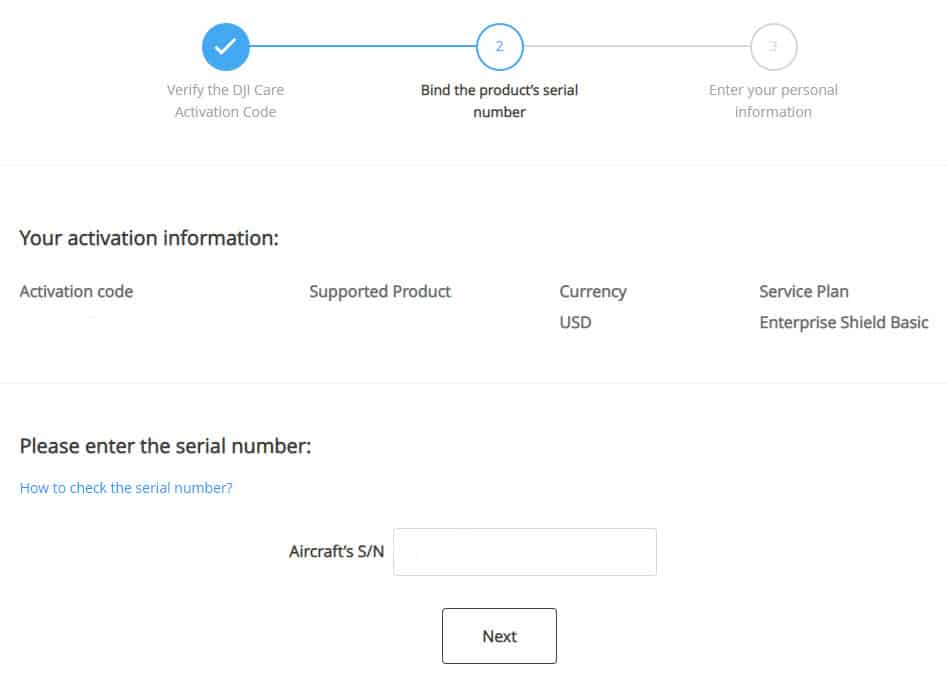 If you need helping finding your aircraft serial number, shield activation code, or have other related questions contact LE Drones

How do you unlock a Geo Zone?

DJI is committed to helping maintain safe air space for all our users and the public. Our GEO system has different levels of geofencing zones to help you choose the right flight location based on different policies around world. If you have been authorized to operate in a GEO zone by the authorities you can apply to unlock flight restriction in Authorization Zones or restricted areas. There are 2 unlocking procedures, depending on the type of zone. Unlocking an Authorization Zone only requires a DJI user account to have its identity verified. When you takeoff inside or near an Authorization Zone a flight restrictions warning will be shown in the app. Tap yes and choose credit card or phone SMS for verification. After verification tap the confirm button to unlock the Authorization Zone. The unlocking license can be checked and managed in the app. You can also unlock and Authorization Zone on the fly safe section of the DJI’s official website before the flight. Click here to request Self UnLock

DJI provides a 24/7 unlocking service for GEO Zones. After an unlocking request is submitted on DJI’s website we will reply to you within 1 hour. If you have any questions sends an email to flysafe@dji.com.

How does a government entity fly legally?

A government entity can fly under Part 107 (and obtain a Part 107 waiver or authorization), obtain a Section 44807 exemption, or obtain a public COA so the employees can fly under one or more of those methods. In other words, you don’t need one for each person, just one for the entire entity. Keep in mind that the pilot might need a pilot certificate depending on which method you choose (Section 44807 exemption & Part 107).

Can a government entity obtain a waiver or authorization?

Yes, many governmental entities choose to operate under Part 107 and obtain Part 107 waivers (night operations, etc.) or authorizations to fly near airports.

What are the advantages/disadvantages of obtaining a public COA?

The big advantage is you have the ability to determine your own pilot training, aircraft, and maintenance standards. However, many public entities choose to fly under Part 107 because it is easier to just do that than try and figure out standards for training, aircraft, and maintenance. Another disadvantage that many don’t talk about is that public aircraft operations under a public COA can only be for certain statutorily listed operations. This creates some headaches because you need to make sure your operations are always within one of the statutorily listed operations and not in some “grey area.” This is another reason why public entities choose to get public COAs and also choose at times to fly under Part 107. There are many different tools available in the Public Safety and Law Enforcement Toolkit.

What does FLIR stand for?

What is the difference between FLIR and thermal?

Active IR systems use short wavelength infrared light to illuminate an area of interest. Some of the infrared energy is reflected back to a camera and interpreted to generate an image. Thermal imaging systems use mid- or long wavelength IR energy. Thermal imagers are passive, and only sense differences in heat.

What is the difference between active IR and thermal imaging?

Active IR systems use short wavelength infrared light to illuminate an area of interest. Some of the infrared energy is reflected back to a camera and interpreted to generate an image. Thermal imaging systems use mid- or long wavelength IR energy. Thermal imagers are passive, and only sense differences in heat. These heat signatures (usually black (cold) and white (hot)) are then displayed on a monitor. Because thermal imagers operate in longer infrared wavelength regions than active IR, they do not see reflected light, and are therefore not affected by oncoming headlights, smoke, haze, dust, etc.

What can drone operators do with a thermal camera?

When a drone is equipped with a thermal capable camera they can translate thermal energy (heat) into visible light in order to analyze a particular object or scene. Thermography is being used by public safety members to find missing persons, firefighters to put out damaging fires, emergency management during disasters and law enforcement for a variety of missions.
Many thermal cameras are made only to fit specific drone models. We provide specs and information on compatibility to help you determine the best thermal drone camera for your project. Have a question? Contact our staff – Click here

What is required to be a pilot, FAA certification, licensing?

And to read the full list of Part 107 guidelines concerning the requirements to be a pilot, obtain FAA certification and licensing Click here

What types of drones are available for law enforcement?

The main two types of drones available for law enforcement which are Multirotor and Fixed-Wing. Multirotor aircraft are what we commonly refer to as quadcopters, hexacopters, and octocopters, meaning they typically get their lift through the operation of 4, 6 or 8 propellers. Fixed-Wing drones are basically an advanced version of a model airplane. While fixed-wing drones can be useful in long-range missions, most law enforcement/public safety users will benefit most from a multirotor, due to its ability to take off and land in a very small area, and its ability to hover over a target area.

Where can I find information to start building a UAS policy and procedure guidelines for my agency?

Your department UAS policy should address the risks associated with the use of UAS. Many of the primary risks associated with an agency’s use of UAS include the violation of FAA regulations on UAS use as well as applicable state laws; violation of federal and state privacy laws; and safety. Due to the complicated and rapidly evolving laws and regulations on UAS use, an agency may want to consider appointing a specific person to act as a coordinator of the UAS program. Generally, a comprehensive policy should address the following:

What are your store hours?

Our normal business operation hours are:

What does IP rating stand for?

What is an IP rating?

IP (or “Ingress Protection”) ratings are defined in international standard EN 60529. They are used to define levels of sealing effectiveness of electrical enclosures against intrusion from foreign bodies (tools, dirt etc) and moisture.

Is IP65 enough for rain?

Rain falls at a low pressure, so ratings in the IP54 to IP65 range are enough to keep the screen safe and dry. These ratings are also enough to stop airborne particulates from damaging the screen and components inside the enclosure.

What Brand Name products do you carry?